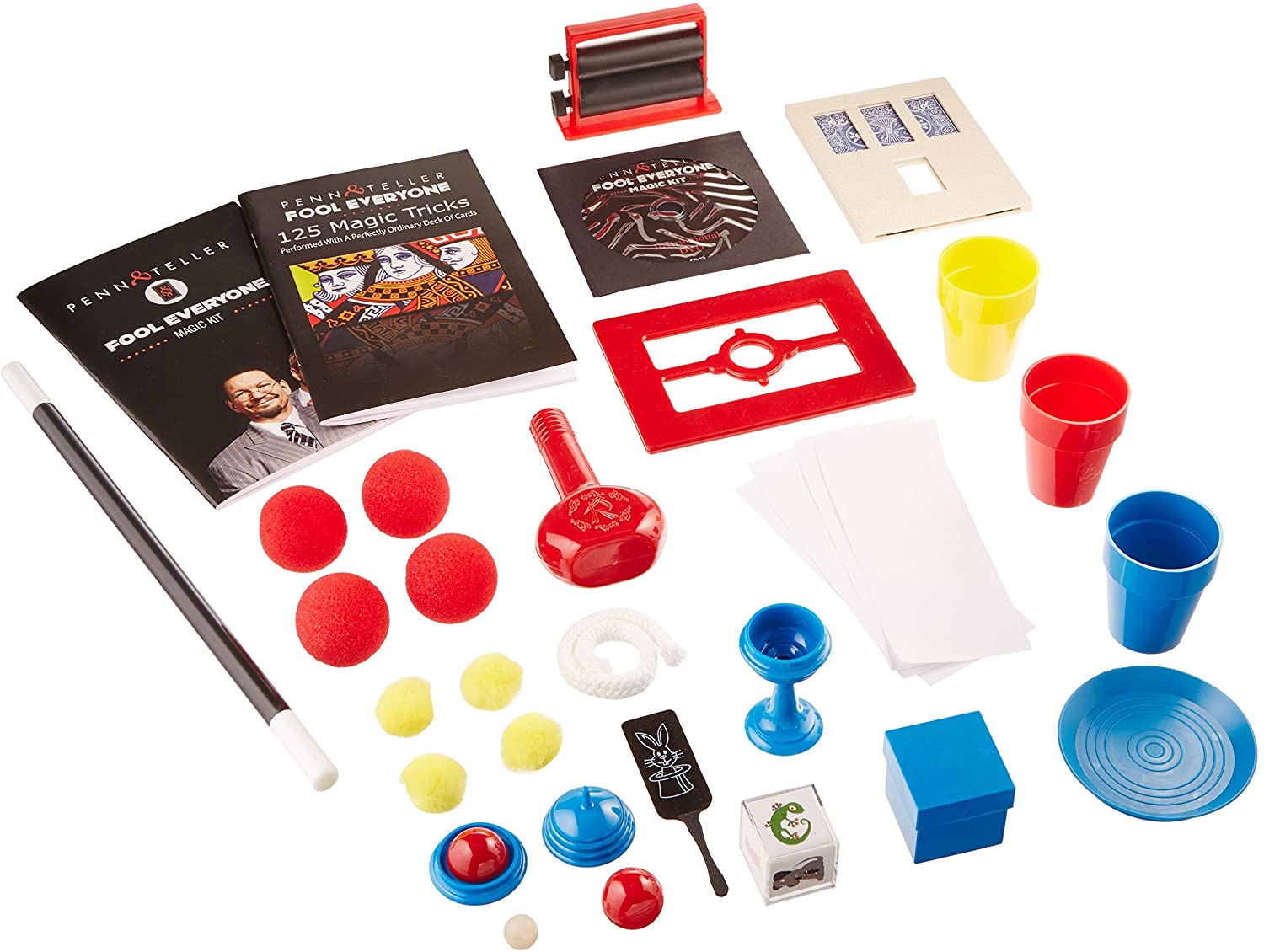 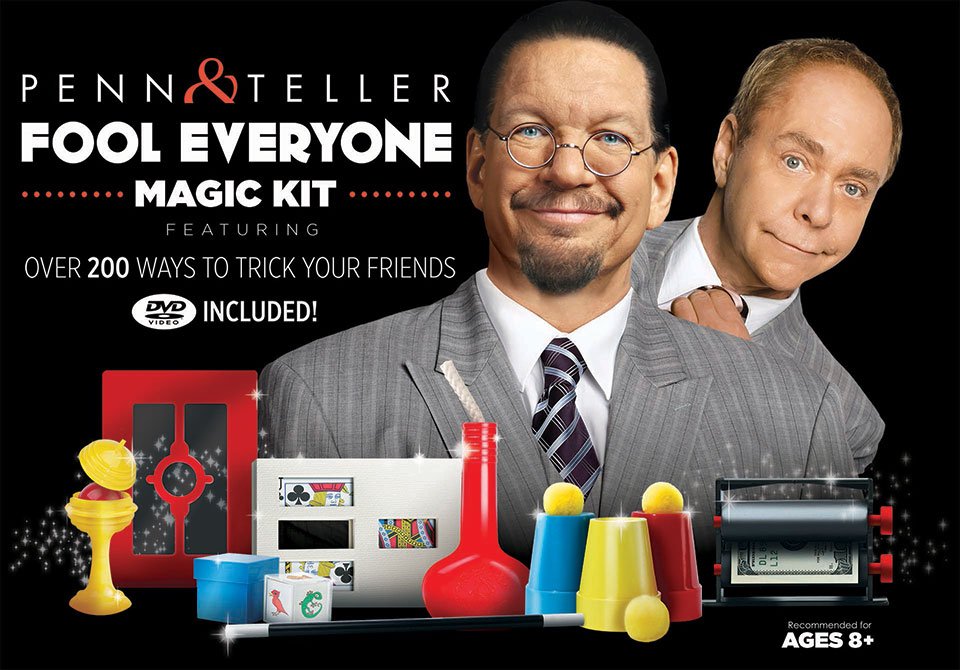 The Penn & Teller Magic Kit will teach you over 200 magic tricks that are easy to learn because includes an instructional DVD.  Great magic tricks kits for kids eight years old and up.

You will become the life of the part with this kit that features some classic of magic like the ball and vase illusion, cups and balls magic routine, zig zag card and much more.

Penn & Teller are the grandmasters of magic. You’ve seen them on “their hit TV series, “Penn & Teller: Fool Us!” where they have featured performances from Mac King, Shin Lim, and many more of the magicians featured here at Magic Every Month.  They’ve broken box office records on Broadway and are the longest-running headling magicians  in the history of Las Vegas with their legendary magic show. Now, for the first time ever, Penn & Teller introduce: “Fool Everyone: The Penn & Teller Magic Kit” for young magicians around the world.

Penn & Teller will teach you more than 200 easy-to-master tricks that will get you started fooling your family, friends, strangers…and with a lot of practice… who knows maybe you will perform on their TV show some day and even fool Penn & Teller yourself. 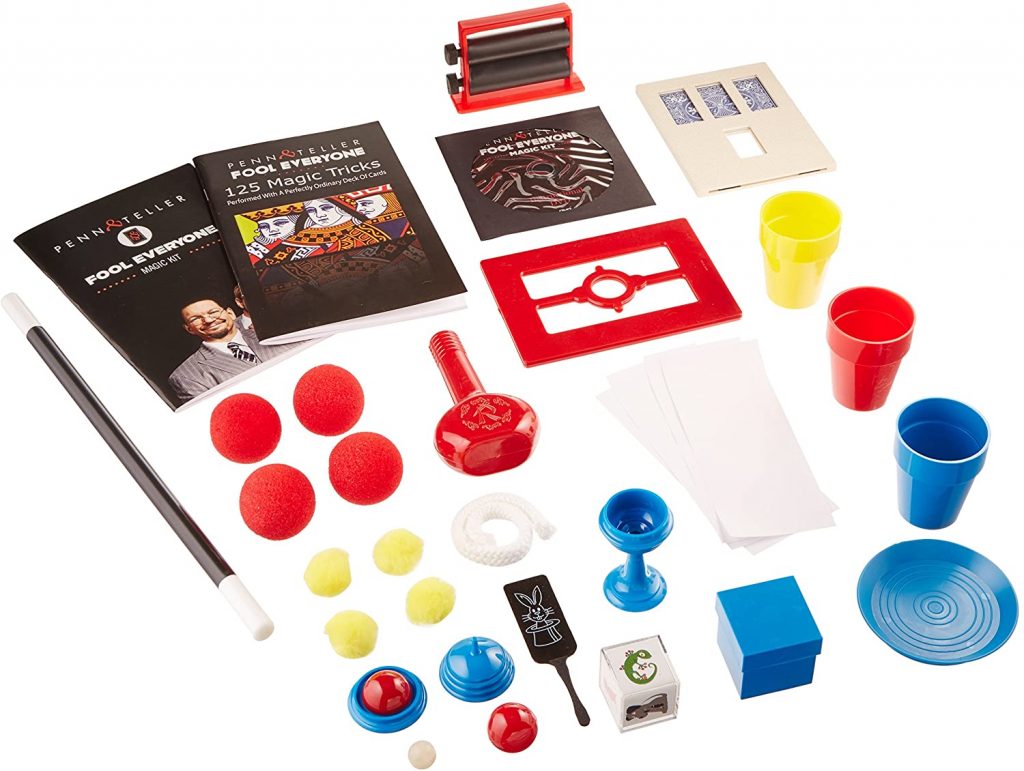 The magic trick you will learn where personally chosen by Penn & Teller and manufactured byRoyal Magic®  who has been a leader in creating high quality magic products for over 50 years.

Royal magic Kits have been responsible for giving many aspiring magicians their start into the art of magic when they where young.

A couple fun facts about this Penn and Teller Magic  kit for kids.

*Penn & Teller didn’t just license themselves and slap their faces on a box like many magician do these days.   Penn & Teller HAND-PICKED every item in this kit, wrote each page in the instructional booklets and worked directly with Royal Magic®’s design team on the illustrations. There’s even an instructional DVD with an introduction by Penn & Teller as
we mentioned previously.

*Custom tricks were created and the entire kit was manufactured to Penn & Teller’s standards to ensure the highest quality props were included in this kit. It is there hopes that
this kit will inspire the next generation of magicans around the world.

*These were the items that Penn & Teller grew up performing when they first learned magic, as kids.  They wanted to teach up and coming magicians with the same tricks they loved as young magicians.

*10+ precision cut, custom illustrated Penn & Teller themed cardstock tricks are also included in the kit which many feel are the best magic tricks in the entire kit.

*Check out some exclusive close-ups of the kit

*Once you own this kit, you’ll get access to exclusive Magic Assistance™ Technical Support on the magic tricks included.

Of all the different magic kits available to kids today, if is hard to beat the Penn and Teller Magic Kit for price and value. 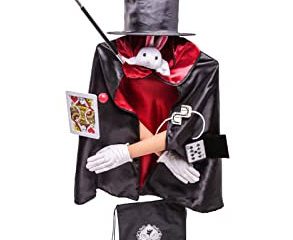 Magic has come along way over the years. Kids are taking up magic as hobby instead of Sports, Karate, Dancing, Crafts, and the normal kids hobbies and activities.   Parents are supporting magic as a hobby Read more…