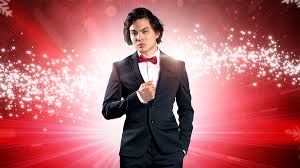 Do you remember the first time you saw magician Shin Lim? Personally I will never forget
it, his act on Penn & Teller blew my mind.  The world discovered Shin Lim when
he appeared on America’s Got Talent.

The magic world was very familiar with magician Shin Lim way before he unleashed his
talent and unique style of close-up magic on the world in the 2018 America’s
Got Talent Competition.  Shin had won the teen close-up magic competition
way back in 2010.

As a teenager Shin was a concert pianist.  Shin prefers not to be called a
magician, but an artist.

Magician is not a  preferred term for Shin Lim, but you can call Shin Lim a
magician if you wish. What the “America’s Got Talent” champion does on
stage falls under  a large category of the entertainment we call “magic.”

Does anyone remember “The Sacred Riana”?

But Lim tends to think of magicians on a grand, large-scale illusionists like
Doug Henning and Harry Blackstone Jr.  He calls himself a
“sleight-of-hand artist.” and oh what a slight-of-hand artist Shin Lim is.

A handsome and boyish 28, Lim works as close-up performer, normally have
members of the audience at his side around a table as he performs his art.

His well-honed specialty is close-up card acts, which is what you’ll be
watching (mostly) on a large video screen should you see him live at the
at the Mirage Theater or wherever Shin performs.

Lim’s act is a slow, in your face miraculous event . He executes a series
of fluid performance perfect timed to music that leave audiences — and
TV reality show judges — gasping in wonder.  A card that has “disappeared”
from someone’s pocket slowly reappears, folded up, exiting Lim’s mouth,
followed by a puff of smoke, can only be described as astonishing.

Shin calls this his Dream Act.

Lim describes his approach to magic as more of an artistic show. He
feels magicians who a goal of attempting to trick people instead of
entertaining them are obnoxious and do nothing for the art.

“I’m trying to change the outlook on card magic—to make it more
artistic, more visual.”  Shim Lin has beautifully  incorporated his
past musical aspirations into his acts, putting nearly all his
routines to music, while staying silent during his performance.

Lim has compared his act to the movie Inception, in that it is
artistic, yet accessible to the masses. He also considered his
magic performance  similar to playing the piano, as much of
his magic involves similar concepts of timing and
synchronization.

Like many magicians, Shim records himself practicing his tricks
and then plays them back in slow-motion to look for any moments
that give away the trick, aware that his fans on YouTube will also
play back his videos in slow-motion to catch him. Lim confirms
that he may use special decks of cards, including blank cards and
decks with special coating that make it easier for him to manipulate
the cards, but does not consider these decks to be otherwise
unique.

Ethically Shim is a Han Chinese. Both his parents were born in Singapore and Shim is
the 2nd of three children in the family. Shin was born in Vancouver Canada in 1991.

His family returned to Singapore when Shin was two years old and the to Acton,
Massachusetts when Lim was eleven years old. Before his tenth birthday  Shin
had shown promise with music.  His grandmother had originally given him a
violin but he was frustrated with the instrument and smashed it after a frustrating
practice session and he turned to the piano.

He attended Action-Boxborough Reginal High School. After graduating from
high school he attended the School of Music at Lee University in Tennessee,
where he double majored in piano and telecommunications.  He was a
member of the Choral Union ensemble. 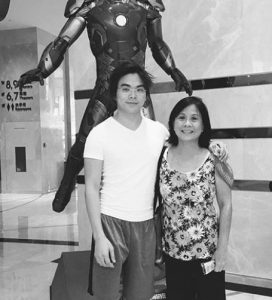 Shin with his Mom

Lim lives near Boston, Massachusetts, and holds both Canadian and
American citizenship. He got engaged to Casey Thomas, an Australian
dancer, on August 19, 2017.  They met during his Macau tour in 2015,
where she was performing at the theater next-door to where he was.
They hung out after-shows where the two theater groups mingled
with each other. The two married on August 19, 2019.

Shin credits Casey with his success on AGT, because she’s a huge
supporter of his passion for magic. In a Valentine’s Day tribute on
Instagram, Shin shared that he had doubts about auditioning,
but Casey “pushed me to go for it.”  Doubt’s about auditioning
for AGT?  SHIN LIM?  I kinda find that hard to believe, what about
your?

Casey shared clips of Shin’s proposal, as well as their marriage story,
on Instagram. Shin proposed to Casey in 2017 during a magic show.

In the clip, Casey can be seen appearing in a cube on stage during
another magician’s act. The performance is then interrupted by Shin,
who appears with a ring box. He explains that they met on that very
stage a year prior, and had their first kiss a few hours later.

As a teenager Shim was faced with making a choice between the piano and
magic.  He took up magic as his career after being diagnosed with carpal tunne
syndrome. Lim was discovered around 2012 and began to tour internationally,
and subsequently won the 2015 Fédération Internationale des Sociétés
Magiques in Close-up Card Magic. His appearances on Penn & Teller: Fool
Us and his wins on America’s Got Talent during its 13th season and on
America’s Got Talent: The Champions led to more fame around the world.

Shortly after his World Championship win in 2015, Lim was contacted
by the producers of Penn & Teller: Fool Us, a show where upcoming
magicians attempt to fool hosts and magicians Penn & Teller with
their acts.

They had seen his YouTube videos and offered him a spot on the
show to try to the hosts.  His routine successfully fooled the hosts.
Penn Jillette described Lim’s routine: “The idea of doing card tricks
—which are silly at their very core — really seriously and really, really
importantly is wonderful.”

Jillette later described Lim as part of a third wave of magicians,
bridging the gap between spectacle performances such as
David Copperfield and Doug Henning and the reactivity aspects
of magicians like David Blaine.

Lim’s 2015 appearance on Fool Us, uploaded to YouTube, went
viral and achieved over 50 million views, leading to his second
appearance on the show in 2017 by invitation.

Lim considered the 2015 Fool Us appearance as the moment
that his “magic’s pretty special”, and decided then to stay on his
career choice of magic over music. His performance in 2015
led to a number of other invitations to perform, including at the
House of Magic in Macau, China, which Lim considered
“the best gig in magic”. His special YouTube video “Pray for Paris”
performance of his “52 Shades of Red” in tribute to the victims
of the November 2015 Paris attacks drew further attention
to his skills

March 2016, Lim injured two tendons of his left thumb while practicing
a new card trick. Initially believing this would have ended his magic
career, Lim received surgery to repair the tendons, and fully recovered after
intense therapy. He credited his surgeon and physical therapist for saving
his career. Subsequently, on his 2017 appearance on Fool Us, he again
successfully fooled Penn & Teller ……….AGAIN!

Lim had been contacted by the producers of America’s Got Talent after
his 2015 appearance on Fool Us to see his interest in performing, but
initially turned it down as he had only one major act he could perform.

By 2017 following his second appearance on Fool Us, felt he was ready
to appear on America’s Got Talent and was further encouraged to try
out by his fiancee at the time Casey Thomas.

Casey encouraged Shim and provided him with advice from her own
work to improve his routines. Shin was selected for the 13th season
of AGT, and on September 19, 2018, was announced as the winner. I

n addition to a the one million dollar prize, Lim also was  given the
opportunity to headline his act at the Paris Theater at Paris Las Vegas.
His performances during the competition, while using variations of his
routines, included more dialogue and other aspects, for example,
demonstrating a bit of his pianist background for his final show.

Lim said that one of the show’s judges Simon Cowell advised him after his
quarterfinal act that he needed to show more of his personality, and to step
back from the card table and add larger elements to his show if he wanted
a chance to win AGT.

He was subsequently invited back to participate in the first season
of America’s Got Talent: The Champions, which started filming immediately
after his 13th-season win, and edged out American ventriloquist and season
12 champion Darci Lynne.

Today Shim Lim is a Star

From his success on Amercian’s Got Talent, Lim began headlining a
long–term Las Vegas residency in the Terry Fator Theatre at the
Mirage Casino Hotel in October 2019.

Lim also began participating on tour with The Illusionists, a theatrical
magician troupe show, as well as his own United States tour in 2020
Lim made numerous guest appearances on talk shows since his wins
on America’s Got Talent, including The Tonight Show Starring Jimmy
Fallon, The Ellen DeGeneres Show, and The Today Show. In 2020, Lim
made a special guest appearance on the second season of America’s
Got Talent: The Champions, appearance in a cameo as part of a magic
trick performed by Britain’s Got Talent contestant Marc Spelmann.