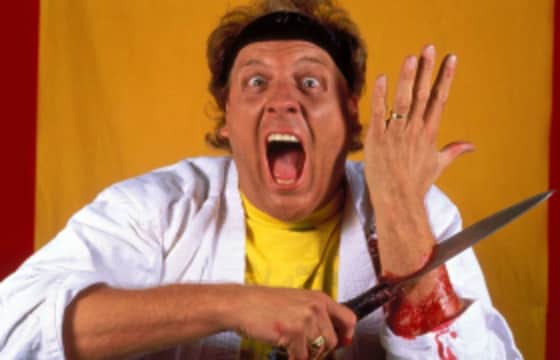 It is no magic community that a lot of controversy has surrounded The Amazing
Johnathan throughout his comedy magic career.   He was not part of the good
ole’ boys magic club, and appeared  to not care less.

In my opinion The Amazing Jonathan had one of the funniest magic acts ever
done.  I saw his show multiple times in downtown Las Vegas, and while always
the same, it was always different.

By all indications he was a tormented, complex, human being like many magicians
seem to be.  Regardless if you needed a laugh you could always rely on the
Amazing Johnathan.  One of the funniest comedy magician to ever walk the
planet.

One of the more unique and intriguing aspects of documentaries are the unexpected you-are-there twists and turns that can occur during filming, a process that usually takes place over a far more extended — and thus more volatile — period of time than a narrative feature. As a result, it’s not uncommon for a documentary’s ending to be a work in progress, if not entirely unknown, until shooting wraps or, in many cases, into — or even beyond — the editing stage.

This inherent uncertainty works both for and against “The Amazing Johnathan Documentary,” director Ben Berman’s patchy and wavering, yet ultimately involving portrait of offbeat comic-magician John Edward Szeles and the strangely flummoxing road Berman (TV’s “Comedy Bang! Bang!” and “Lady Dynamite”) found himself on during the film’s production. Among other things, it’s a nerve-racking cautionary handbook for budding documentarians.

“Everything in this film is strictly based on the available facts,” reads a wry opening disclaimer that’s as elusive as much else that goes down in this surprising and unsettling tale. Still, viewers can’t say they haven’t been warned.

But a more pertinent quote here comes from a friend of Berman’s who asks, “Can you trust anything that a magician does?” It will prove nothing if not a fair question.

In 2014, Szeles, or “The Amazing Johnathan,” an erstwhile TV celebrity and longtime Las Vegas entertainer, announced that he had only one year to live due to his ongoing battle with the heart condition cardiomyopathy. Financially set, he decided to retire and live out his days, as comfortably as he could, with new wife Anastasia in their large Vegas home.

Three years later, Szeles was, one could say magically, still alive. Antsy and floundering, he announced a series of “farewell” shows. Meantime, Berman, learning Szeles was eager to be the subject of a documentary, connected with the performer and signed on to cover his tour and his life, perhaps through to its inevitable fade-out. Little did the filmmaker know he was stepping into a kind of documentary “Twilight Zone.”

For starters, Szeles, now 60, an inveterate prankster and disruptor, is hardly the most sincere or engaging personality. Irascible, self-absorbed and, it appears, somewhat unstable, Szeles segued from a 20-year cocaine addiction into a methamphetamine habit that, even he admits, has likely taken a toll on his people skills. That said, Anastasia, though at times beleaguered, seems quite devoted to her eccentric husband.

However, once Berman is on the road with Szeles, he’s thrown a wicked curveball: The magician has secretly engaged a second film crew to shoot a documentary on him. Is this just a practical — or rather, impractical — joke? Or is it some kind of Machiavellian attempt to mess with Berman and test his mettle and commitment to the project?

Either way, it sends Berman into the first of many dark alleys, rabbit holes and moments of agonizing self-doubt and confusion as the director tries to figure out how to salvage his movie while also playing nice with the cavalier Szeles and the competing filmmakers, who allegedly worked on the Oscar-winning documentaries“Searching for Sugar Man”and“Man on Wire.”

At first, this bombshell sends the picture into an uncomfortable free-fall that tries our patience with the sad-sackish Berman and his seeming ill-preparedness and naiveté regarding his subject (might Szeles have actually faked his death’s-door diagnosis?) and perhaps about filmmaking in general.

At the same time, Szeles becomes more unpleasant and intractable, not to mention that the bewigged performer’s comedy-magic act, at least as captured here in its revived state, feels creaky and underwhelming.

Despite continued insult-to-injury setbacks, Berman, who also co-shot, co-edited and served as a producer, hangs in there and decides to use these mounting obstacles in his narrative favor. How exactly he gets there takes a while, but his stealthy and/or desperate efforts (that meth smoking scene!) give the film a welcome boost. Suffice to say, Berman concocts a surprisingly gutsy Hail Mary pass to find a way home for the film.

A deeper dive into Szeles’ ostensibly complex psychological makeup might have given the movie more heft, though Szeles, magician that he is, clearly remains more about the illusion than the reveal.