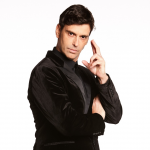 Lioz Shem-Tov is a comedian from Israel.

He has performed as a professional magician for the last  20 years.  Loiz has appeared on many local TV Shows and performed at comedy clubs around the world.

Lioz started his professional career in  2001 on the road with daily performances in comedy clubs everywhere.   In 2008, Lioz was invited to perform on NBC’s “Last Comic Standing”, where he reached the semifinals, that were held in Las Vegas.

Through the years, Lioz perfected and fine-tuned his comedy style, while in the meantime, regularly performing in a stand up comedy TV show, aired on “Nickelodeon” Channel.

In 2014, Lioz was invited to participate in a big standup comedy competition, titled- “Funniest Person In The World”, at the world famous comedy club “The Laugh Factory” in Los Angeles, where he reached to the finals. In 2018, Lioz  was invited to perform in “Israel’s Got Talent”. He reached the Semifinals.

After the successful “Israel’s Got Talent” appearance, Lioz was invited to perform at “America’s Got Talent”. Lioz’s AGT’s performances were hilarious, and got more then 100 Million views on social networks.

After AGT Lioz performed on additional notable TV shows, around the globe, such as:

“DIVERSION” (France), “iUmor” (Romania), “El Hormiguero” (Spain) and more. In early 2019, he was invited to perform in “Australia’s Got Talent”, where not surpisingly he  reached the Finals.

Following his performances in Australia, he was also invited to perform in “La France A Un Incroyable Talent” (“France’s Got Talent”) Lioz, now recognized by many as an International Comedian, brings his hilarious unique style of comedy magic to the world.

Lioz Shem Tov certainly made an impression with his ‘America’s Got Talent’ audition. (Photo: NBC)

There is a reason Christopher James has worked in so many diverse venues. Magic is boring, tedious, and so often mocked. Christopher is well aware of this. If you want a traditional magician Read more…