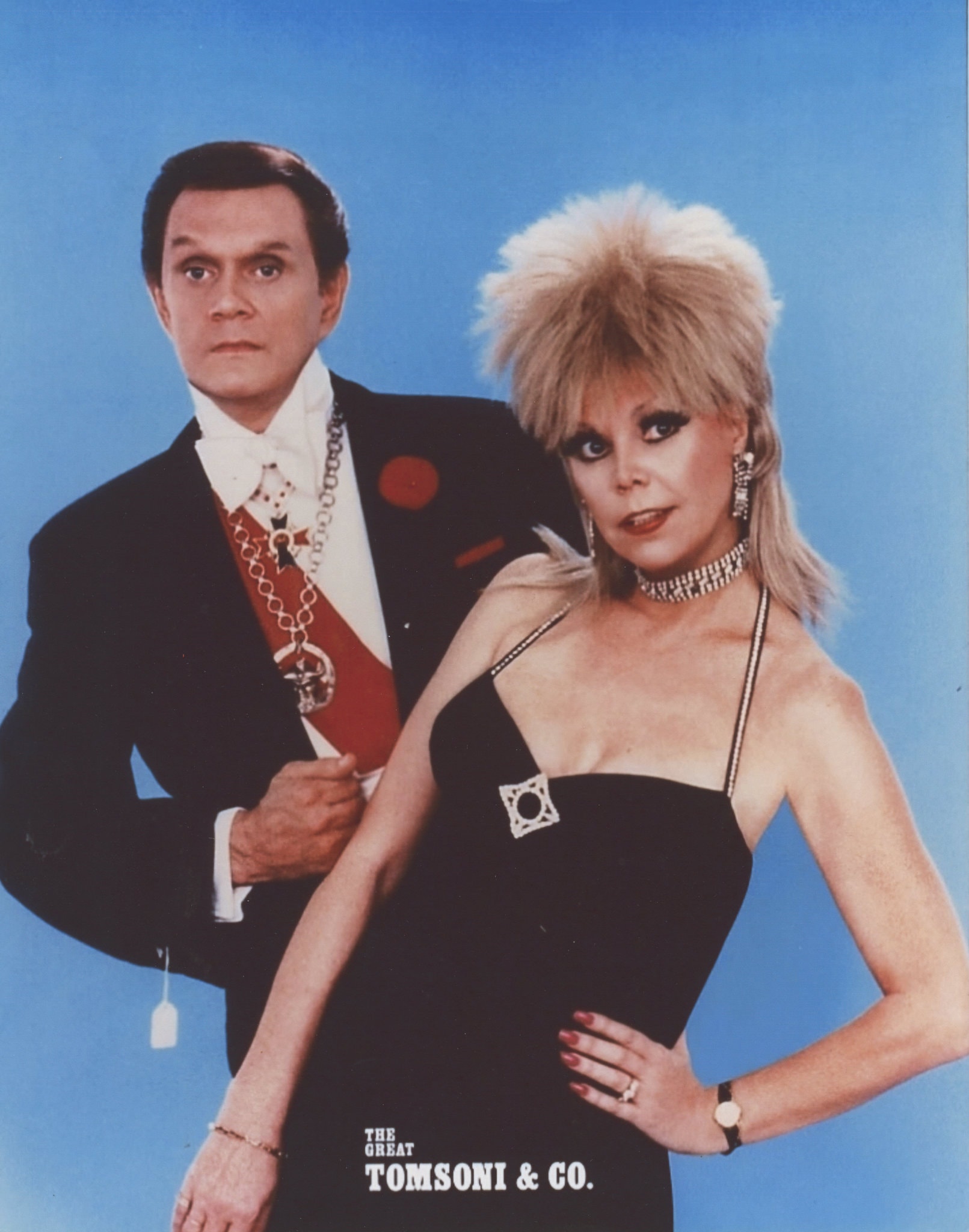 When you think about the Top Comedy magic acts in history The Great Tomsoni & Co are at the top of that list.

I had the opportunity to see this act live in 1973/74 at the International Brotherhood of Magicians National convention. The Great Tomsoni’s comedy magic had the crowd in stitches. I have seen hundreds of acts over the years but The Great Tomsoni & Co. was unforgettable. I was a young teenage magician at the time, at the time hat performed a dove act. Tomsoni was the first magician I ever saw that did a double dove production.
It blew me away.

John began his entertainment career in 1951 as a harmonica player with Jerry Murad’s “Harmonicats” and laterNfound his niche in comedy magic.

John Thompson and his talented wife Pamela Hayes amused and entertained audiences for many years with theirnhilarious comedy magic routines. Pam & John worked together in an act they called the “Great Tomsoni & Co”

John performed as a cool and polished, yet geeky & bumbling magician and Pam was his disrespectful, gum chewing assistant that really didn’t give a flip.

John work for years as a magic teacher and consultant, having advised and consulted some of the top magicians in the business. Johnny Thompson, was highly respected among magicians not only for his performing skill but also as a teacher, advice-giver and magic historian.

Some of the younger readers my remember the THIS TIME I’VE GOT IT RIGHT video.

The magical single and music video featuring The Great Tomsoni with special guests Penn & Teller (both acts recently featured on the new Arsenio Hall Show) and members of the Las Vegas “Jersey Boys” cast, is causing a stir on regional and internet video channels becoming a Halloween favorite in it’s second year of airplay. This madcap Halloween video has been gaining traction on VideoDetective.com (powers videos on other sites including: Veoh, Allmusic.com, Starpulse.com with 11 million viewership),Toronto’s MuchMusic.com, and New York’s Video Hits and H20 Television with over 2 million viewership.

The song, was co-written and produced by hit songwriters Denny Randell and Biddy Schippers,.

In the popular comedy video, mad scientist Tomsoni, who seeks to create a new formula to woo his love interest, Las Vegas actress Joelle Righetti., who at one time worked as Lance Burton’s number one assistant.  The video gets a surprise boost from Penn & Teller, along with Randell & Schippers and performers from the Las Vegas cast of the Tony Award-winning show “Jersey Boys.” who also appear in the video.

Over his career John also acted in several television series and movies, he even sang in a music videos. To say he spent his life performing and making people laugh would be an understatement. His acting credits include: One Day at a Time, Lunch Wagon, Hart to Hart, Fantasy Island, Serial, Flying High, Joyride to Nowhere, Eat My Dust, The Young Nurses and Bozo’s Circus just to name a few.

The Great Tomsonie performed shows for casinos, cruise ships and television audiences. The act kept live audiences laughing so much that they might not have fully appreciated the timing and skill with which the routines were performed.

Johnny Thompson understood how to perform a routine for maximum effect. This made him a sought-after adviser for television shows like “The Carbonaro Effect” as well as for magic stage acts Siegfried & Roy, Lance Burton, Penn &mTeller and many other high profile well known magic acts.

Mr. Thompson provided consulting and advice to all sorts of magicians, whether established or up and coming magicians.

Not just comedy magic, but most of the popular stage magicians of our time have picked Johnny’s brain at one time or another.

As a youngster Johnny saw a movie about riverboat gambling & determined that he wanted to be a card sharK and worked towards that in the streets of Chicago.

He started to understand that no one wanted to play poker with a 12-year-old card shark,” he told The Sunday Telegraph in Sydney, Australia, in 1996. Instead he turned his dexterity with cards toward magic tricks. “I was pretty adept at palming,” he said in a video interview with Full Circle Magic. “I’ve always had large hands.”

Johnny enjoyed hanging around comedy shops in Chicago, honing his skills. He worked briefly as a fire eater and even a sword swallower with a carnival sideshow, then in 1951 made the first of countless appearances in Las Vegas — not as a magician, but as bass harmonica player with the Harmonicats, a popular group at the time, filling in for an member
who was sick. 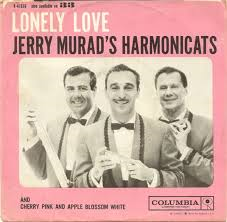 He excelled on the harmonica and was knowledgeable about jazz, and he played with other bands besides the Harmonicats and even formed his own. But magic was the work that stuck. Doing a conventional magic act, he was booked into Playboy Clubs with a comedy team, which got him thinking about incorporating humor into his own routine.

In 1969 The Great Tomsoni, the Wizard of Warsaw, a self-important due who couldn’t quite get his tricks quite right
was born.   His routines where hilarious.  He would produce a bowling ball instead of a
rabbit, and the bits go on and on, with impeccable timing.

— producing a bowling ball from beneath some scarves, for instance, when he was hoping for a rabbit.

He married Ms. Hayes, an actress with strong comedic skills, in 1973, and the act became the Great Tomsoni and Company.

A classic routine featured the Great Tomsoni making a series of doves materialize and disappear. Ms. Hayes, in the role of magician’s assistant, is also made to disappear, in a sense — the Great Tomsoni inadvertently pulls her dress off, causing her to run offstage. Her other duties included informing him, partway through the bit, that his fly was quite noticeably down.

On their television series “Penn & Teller: Fool Us,” for which Mr. Thompson was a consultant, Penn & Teller recently paid homage to him by recreating the routine, with Teller as Tomsoni — a task, Teller said in a telephone interview, that required Mr. Thompson to teach him not only the tricks, but also the comedy.

“He understood how to do a proper comic take, so he taught me physically how to do that,” Teller said, as when the magician gets the embarrassing news about his fly — look left, look right, then look, um, down. “He had broken it down into every single physical step.”

Mr. Thompson and Ms. Hayes performed on numerous television shows, on casino stages in Nevada and Atlantic City, and overseas, in London, Monte Carlo and elsewhere. Along the way Mr. Thompson began advising others.

Among the things that made him so was his encyclopedic knowledge on the history of the profession said Mr. Matt from the Carbonaro effect.   Mr. Thompson served as a consultant on his TV series, in which Mr. Carbonaro sprung tricks and illusions on unsuspecting people.

“Johnny had a profound way of taking an idea and creating an illusion that worked,” he said by email. “When I called him and asked, ‘How do I make a guarded car vanish from inside of a dealership?,’ without missing a beat he said, ‘We don’t, we vanish it from a tent outside, just like the vanishing elephant illusion,’ ” a reference to a classic trick performed by Houdini and others magicians over the years.

Mr. Jillette said that this knowledge of history had also come into play in a less visible role that Mr. Thompson filled: that of informal mediator when one magician thought another might be stealing material.

“If two people felt they were doing material that was too close, Johnny knew the provenance of everything,”  Mr. Jillette said. “He could adjudicate that.”