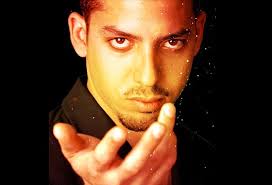 David Blaine is a talented, successful magician and endurance artist. In this
article we want to give you insights into what makes him tick & the path
to success this young man has taken.

David Blaine is known as much for breaking multiple endurance world records and going through extreme emotional, mental & physical tests, as he is for his unique Street Magic. Since 1997, Blaine has completed over a dozen unbelievable stunts that took his body to the limits, and he is also credited for revolutionizing the way magic is shown on television.
Unfortunately he is also known as the first magician to use trick photography in his
show.  While he did perform the levitation on the street in front of a live audience, much
like a hypnotist, his audience was carefully chosen.  Then photos of him levitating were
edited in to the clips for maximum effect.

His first television special, Street Magic , impressed both journalists and audiences and he acquired television success not only through the difficulty of his stunts, but also by changing the perspective of magic and magicians by performing close up magic on the
Streets of New York.  Instead of having the camera focusing on the performer all the time, Blaine included frequent views of audience reactions. Let’s see what has determined New York Daily News to consider that “Blaine can lay claim to his own brand of wizardry. The magic he offers operates on an uncommonly personal level.”    Maybe to laymen, but
talented close up magicians for centuries have created an uncommon personal level.

“I never look at anything really as a success. I always look at it as a
work in progress.”
– David Blaine

David Blaine  teaches seminar attendees how to hold our breath for
longer than Harry Houdini’s lifelong record of three minutes and thirty
seconds — which still pales in comparison to David’s own record of
just over seventeen minutes.  Is David Blaine really able to hold his
breath for over 15 minutes?  What do you think, let us know in the
comments section at the bottom of this page.

How did David Blaine Get Discovered?

David Blaine made a tape of a magic performance and sent it to ABC,
and  the response was tremendous.  So not only is he a magician
and endurance artist, he is also a self promoter and marketer,
much like Harry Houdini and many other magicians throughout
history.

His first special, David Blaine: Street Magic, was a ratings hit in 1997.
David Blaine: Magic Man followed two years later. In 1999, Blaine
performed his first endurance stunt, and in 2000, he followed with
“Frozen in Time” in which he was frozen into ablock of ice for
72 hours.

Magician David Blaine was born on April 4, 1973, to a single mother
in Brooklyn, New York. A street performer provided Blaine’s introduction
to magic, as the curious 4-year-old waited for a subway train. Magic
was not his only interest, however, and Blaine went on to attend the
Neighborhood Playhouse drama school and appeared in several TV
commercials and soap operas.

Supposedly It was during this time that his ability to levitate off of the
ground surfaced   (Sure it did – 🙂  ) and, at the urging of his personal
physician, Blaine underwent a thorough examination.

When Blaine was 21, his mother was stricken with cancer and passed
away in 1994. Though grief-stricken, he continued to perform and make
a name for himself at celebrity functions by doing magic tricks for
famous people, such as Mike Tyson, Al Pacino and David Geffen.

After his Frozen in Time”  Two years later, he stood on a 100-foot
pillar for 35 hours in “Vertigo.”

Unfortunately, there were more skeptics than supporters during 2003’s ”
Above the Below,” which involved Blaine living in a glass box suspended
by the River Thames in London for 44 days, without food. The stunt gained
worldwide media coverage, and thousands gathered at the site near
Tower Bridge to witness his release.

In New York in 2006, his “human aquarium” stunt involved submersion in
a water-filled sphere for seven days, receiving air and food through tubes.
In a dramatic finale, he failed in his attempt to break the world record for
holding breath under water, while simultaneously escaping heavy chains.

David still performs shock and all effects, he will show up on various
late night TV shows from time-to-time.  Truthfully, I have mixed emotions
about David Blaine, what about you?

I am all for moving the hobby, the art, and the profession forward and
keeping it in the public eye.  The Levitation ordeal was obvious to
magicians when it happened and very disappointing.

So what are your thoughts on David Blaine?  The bottom line he is
a kid that grew up with a single mom, and has created his own
American Dream by all accounts, and it is hard not to cheer for
somebody like that.  I wish him well in the future.

The self levitation has been performed by magicians for many
years. Blaine made it popular.  I have to admit, even though
I had stopped performing professionally at the time the Magic
Man Show aired, as soon as it was over I was buying the
self-levitation video.  I had to confirm that was was going on
was what I thought it was.   Judging by the number of these
training DVD’s on eBay, others probably did the same thing. 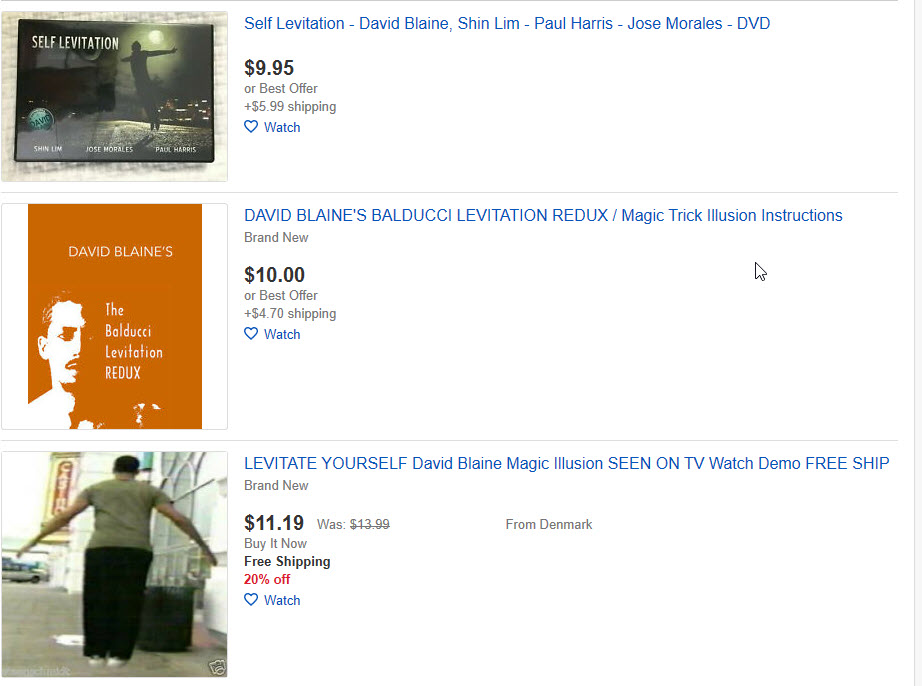