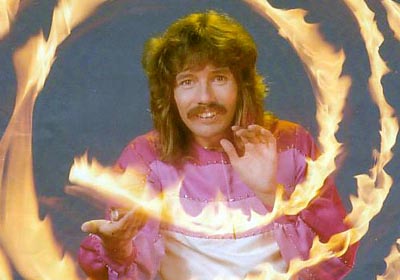 Many credit Illusionist Doug Henning for bringing magic back and
popularizing it again in the late 70’a & early 80’s.    His Broadway show,
The Magic Show, earned him a Tony Award nomination.

Doug performed a lot of popular illusions of that time period, thin
model sawing a girl in half,  the Zig Zag Girl, and many others.  However
his “Things that Go Bump in the Night” Illusion blew many magicians
away they first time they saw it.  To this day, it has been modified and
copied by illusionist around the world.

Doug Henning became known for his curly locks and crooked smile,
Henning was a familiar face on TV in the 1970s and early 1980s, and was the
star of Broadway’s The Magic Show. 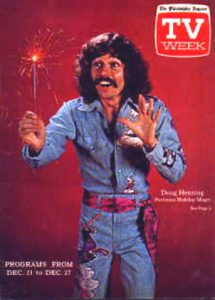 With Doug Henning’s World of Magic. He earned a Best Featured Actor (Musical) nomination for his work in the conceptual tuner, The Magic Show, in the 1974-75 season.

Looking like a hippie, he is credited with re-stimulating an interest in magic and illusion, introducing such tricks as Harry Houdini’s famous “water torture escape” to a new generation.

Doug Henning was diagnosed with liver cancer in 1999.

A native of Fort Garry, Manitoba, he moved to the United States and became an international star illusionist.

Later in life he appeared to drift and on of magic circles
and in most radio and TV interviews appeared to be more
interested in Transcendental Medication that he did magic.

He was one of the supporters of a $1 billion theme park,
Veda Land, proposed for the Niagara Falls area. The parks
is linked to Indian spiritual leader Maharishi Mahesh Yogi,
the founder of Transcendental Meditation.